The guitar is usually tuned EADGBE – this is a compromise between ease of playing melody and being able to play a huge variety of chords (especially bar chords).

A good key to learn first is C major. This is all the white notes on a piano or music keyboard. The black notes offer optional flat or sharp notes to play in any other key, and to conjure endless delightful exotic chords whilst learning C major.

A minor (Am) has exactly the same notes as C major (C) but starting on the note A, rather than C. So,

To play a scale of C, just play:

To play a scale of Am:

From C to C (or A to A) is called an octave. The end note sounds ‘the same’ as the starting note, but is one octave higher. This means the sound waves have exactly double the frequency.

A good example of how the major scale sounds is the song ‘Morning Has Broken.’

The simple chords are triads (3 notes) playing every other note, starting with the root. C E G for C major. On a piano, a skilled pianist might play  C E G C E G C – it’s still C major, but they are having fun and have big hands 🙂 (more later)

A good example of a minor scale is the song ‘Three Blind Mice’ which is often taught in early school days because it introduces the minor scale so clearly (though I’ve still not met anyone who had this explained to them in school. Hopefully things are different nowadays).

The MAJOR chord sounds as it does because from the first (root) note to the second is 4 frets on the guitar fretboard.

The MINOR chord has 3 frets between its first two notes.

Both types of chord have an interval of 7 frets between the root note and the 3rd. (C to G {major chord}, or A to E {minor chord}).

The names we use for all these definitions can wait …
let’s learn a song.

My choice for learning Am / C is

In this song, the chord progression is the same all the way from beginning to end:

Before trying to play the chords, especially at the same tempo as the song, try just playing the bassline:

Spotting a bassline such as this is how many experienced musicians rapidly ‘get’ the chord sequence for a new song – often during the first hearing. 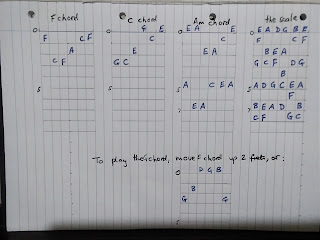 It is a rewarding habit to form.

The scales C / Am, and some chords:

What may seem like peculiar tags for this post – Art Therapy, singing, self care – make perfect sense! Playing any instrument is a from of singing; Music is equally as therapeutic as visual Arts, and even more widely accessible. (Many people believe they have the worst voice in the world – all but one must be wrong!! If public singing is a bridge too far – make a playlist of your favourites and join in – it even counts as exercise, particularly the breathing).