Several news reports highlight the growing domination of wealth, power and economic/banking control by the few. 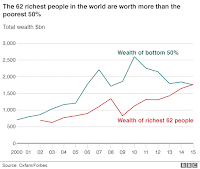 “Oxfam calls on governments to take action to reverse this trend. It wants workers paid a living wage and the gap with executive rewards to be narrowed.

It calls for an end to the gender pay gap, compensation for unpaid care and the promotion of equal land and inheritance rights for women.

And it wants governments to take action on lobbying, reducing the price of medicines, taxing wealth rather than consumption and using progressive public spending to tackle inequality.”

The report doesn’t seem to mention the strategies used by the pathologically wealthy to enslave nearly everyone for ever, but inflated house prices (forcing the vulnerable into a lifetime of extortionate rents and governments into sometimes naive benefits); corporate media and advertising to encourage loans, hire purchase and destructive consumerism.

The substance of the news from Oxfam

The Oxfam summary: The global inequality crisis is reaching new extremes. The richest 1% now have more wealth than the rest of the world combined. Power and privilege is being used to skew the economic system to increase the gap between the richest and the rest. A global network of tax havens further enables the richest individuals to hide $7.6 trillion. The fight against poverty will not be won until the inequality crisis is tackled.

The researchers combined European Union and World Bank data to calculate how different income groups spend their money. They say it’s the first study of its kind.

It found that in transport the richest tenth of consumers use more than half the energy. This reflects previous research showing that 15% of UK travelers take 70% of all flights.

The ultra-rich fly by far the furthest, while 57% of the UK population does not fly abroad at all.

It’s very refreshing to hear of a clear majority never conforming to the dominant ‘faith’ of the western world – Self Indulgent Consumerism.